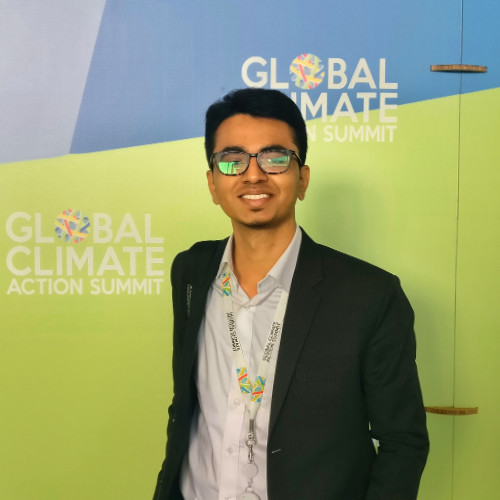 We here at Isaac’s Science Blog are pleased to be hosting our second interview with none other than Sada Wachche! Sada is a Graduate Student at the Institutes of Energy and Transportation at the University of California-Davis. He holds a bachelor’s degree in Mechanical Engineering and has worked as satellite researcher, solar energy startup founder, and an energy consultant before continuing his higher education.

1. Tell us about yourself.

Well, I started out by studying mechanical engineering in India. I was really into everything that Mechanical Engineers were supposed to love like cars and spacecraft. I joined the satellite team at my school and worked on building a satellite for ISRO (The Indian equivalent of NASA). That was my introduction to really important things like design thinking, using a fab-lab to prototype things, etc.. I then was able to work with the MIT Media Lab in Pune (my home/college town) on their Fab Lab. Me and some teammates focused on creating a solar energy startup in India focused on Concentrated Photovoltaics systems (which work by focusing solar energy onto a single highly solar cell) that we called “Medley Energy”. It didn’t go that far, but it was very interesting. That was when CPV was really coming out and labs all over the world were trying to make it market scalable. It was much more efficient and required less silicon less material is used than a traditional PV system, making it more sustainable. All of the hope was that this cell was multi-functional their efficiency can go up to 40%. All of the big labs were to make this cheaper than silicon. It was really hopeful, but after a decade of R&D and cost decreases conventional solar from China became really cheap and the case for CPV did not exist anymore. This experience taught that there are really important things besides engineering [when working in energy].

2. What inspired you to work in energy?

I would say that my work as a Summer intern consultant at Black & Veatch (A U.S-based energy consulting company) during a really flipped on the light. Although oil-and-gas was their main focus in India, they had lots of people in renewables and gave us training in all of the systems. What I did there was design energy systems (boiler, condenser, etc.) at a high level. This really made me want to change from component-level mechanical engineering thinking to system-level policy thinking.

3. What do you do for Grad School?

When I had first came here, I had a PhD in mind but I wanted to try out a Masters first. After realizing the sharp increase in interest in India, I decided to do a double masters in Energy and Transportation. I’ve focused on the life-cycle assesment of EVs and 10 years down the line what will the clean-vehicle market will look like. I am particularly focused on the policies of India, the U.S, and China.

UC Davis is known for energy efficiency, economics, and transportation. This entire combination really attracted me. The research of a professor here named Alissa Kendall also attracted me. She works on lifecycle analysis which can see the total environmental impact of a system, material, or product. During my first semester I worked with her on a lifecycle assesment of CPV for U.S and Chinese made solar panel supply chains and how they differ. This was also the same time the trade war went on and how China shifted manufacturing to other Asian countries so we took that into consideration. We even thought about an import tax proportional to environmental impact. The final results were not that much difference in GHG emissions but still noticeable. Dan Sperling, who’s the author of California’s Low Carbon Fuel Standard [one of the most important documents in the field], is also a professor here.

I also really wanted to come to California because I thought that it’s really on the forefront of energy policy and very friendly to immigrants [turns out both were true!]. When I came out to Davis I went through a cultural shock as people randomly waived hi to me.

5. What caused you to shift from engineering to policy?

When I was Black and Veatch I went from component level to system level. I really enjoyed that transition, and when I’m on a higher level I’m really enjoying everything. The solar startup was the final nail in the place since we really struggled with finance and policy. That’s when I learned the importance of policy. I really enjoyed the interdisciplinary nature and working with a diverse group of people.

6. Why are you learning Mandarin (普通话)? How is it going?

I just took one course in Mandarin last fall (and I’m already forgetting it!). As an energy student, you probably know all of the things happening in China. The scale of transition happening in China is CRAZY! Any new clean technology that comes out they will implement it in large scales. They’ve on the forefront of adoption of not only electri but also hydrogen electric vehicles! At UC Davis there is also a China-energy center where I get to learn about things going on in China. We even recently got an autonomous shuttle on the [Transportation Research Institute] campus.

I’m also focused on China because I think that India can learn more from China because of the cultural and political climate. Most of the time India will try to imitate the West and not everything will work (such as subsidizing high-cost EVs). 2-wheelers and 3-wheelers and cheap electric vehicles that’s how it will work. India needs to diversify where its getting its lessons from and I’m trying to be the change. Energy change is a systemic change and needs the government to push it, even through it might not seem cost effective it does in the long-run.

7. What do you think will be the future mix (2030 US, India, and China) of transportation?

Frankly no one will know, but battery electric will be the major driver and all of these key markets will get more of these vehicles and East Asia should have a sizeable penetration of fuel cells. For example, the Olympics in Tokyo will have a large scale deployment of fuel cell buses. India will also go with battery electric. For a thesis I have been thinking about using life-cycle methodology to evaluate vehicles in a better way. There is no unified analysis since petroleum vehicles were built in a similar way with their tail-pipes but there needs to be analysis on the impact on the production side for EVs. LCAs can really guide that work. A lot of EU countries were thinking about this for a while, but now is a good-time to start working on this.

8. New sites/podcasts you listen to?

A LOT. I keep on changing, but The Energy Gang and The Energy Transition Show are pretty constant. I also like this podcast from energy enthusiasts in Bejing called Environment China (link).

9. Favorite thing about working in your field?

I think my favorite thing is the interdisciplinary aspect. Once in a while I will be surprised by people taking a new angle on an issue and show how their approach is completely different and how their way is completely new. I really like listening to different kinds of people and meeeting and discussing with them.

10. Least favorite things about this space or would like to see improved?

I don’t know the least favorite…. But my pet-peeve is the same thing I see in many lifecycle analysis. There is a lot of greenwashing going on through marketing by private companies.

11. What should someone do to work in this space?

I think that energy is a really broad field and needs to be taken as such. I see this as climate mitigation, adaptation, and resilience. All of these are different sectors and you specialize in one or more of these areas. Get in experience to what you learn as an undergrad and then see what has been missing.

12. What is the benefit of a PhD over a Masters?

Do a PhD if you really want to work oin certain technologies or a particular problem (energy access to developing countries). Do a Master’s if yu want to go into the field quickly.

13. What are good graduate programs for this field?

This is a very broad field, but for interdisciplinary transportation California has 4 or 5 of them. Public policy and engineering programs that are good are TPP at MIT, Maryland (MPP), Minnesota (Science, Technology, and Environmental Policy), Carnegie Mellon (Engineering and Public Policy, Energy Science and Policy), UChicago, UT Austin, and UC Berkeley (ERG).

14. If you were to go back and change one thing in your career what would you do?

I’m the person who thinks a lot about the past, and when I talk to economics people I get really impressed. Sometimes I think that I should have majored in economics instead! I feel like economics is the overall thing that solves these energy problems. Mechanical Engineering concepts are not that hard to get later.

Oh god, that’s a very difficult question to answer! I really don’t know, but trying to figure out my thesis. When I started this program, I really wanted to go back to India, but experience in the US is good no matter what. If the work is good then I might stay here. Energy is a global problem and everyone is hurt and benefits from it. I need to see if I will work with the industry or the public policy and I think that consulting will be able to utilize my skills well. Both the public and the industry don’t really know or are not certain of things that really bleeding edge like the impacts of higher penetration of electric vehicles.

So that’s all folks! Thank you to Sada Wachche for being such a wonderful interview, and wish you the best of luck with graduate school and your career! For anyone wishing to connect with Sada, his website can be found here, his LinkedIn can be found here and his Twitter here.