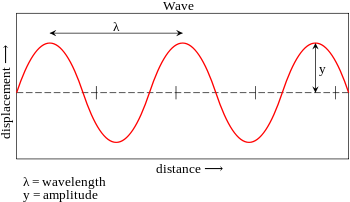 Waves are a most peculiar phenomena in the physical universe. To put it concisely, waves are a transfer of energy through oscillations and vibrations from one point to another. Waves are one of the most commonly occurring facets of natural natural world, being present in everything from water perturbations to earthquakes.

Waves a multitude of intriguing properties. Unlike particles, when two waves come into contact, instead of colliding, they combine to form an temporary superposition,  and then proceed on the path they were on. This phenomena is known as interference.  During this ephemeral interference state, their directions of oscillations are combined, so if two (or more) were oscillating in the same direction he combined amplitude would be greater and vice versa if tf there directions were incongruous. Waves can also be reflected of reflective media, such as glass. Since waves are commonly are thought of of disturbances through media, their phase velocity is contingent upon such, and if their surrounding media change, then so do their phase velocity. Think of it like a falling ball being dropped into a pool of water, at first the ball only has to face the fluid resistance of the surrounding velocity of the atmosphere, but after coming into contact with the water it will slow down due to the denser material makeup of water. In fact, this is the reason why light changes angles when it strike water!

Wave motion comes in two forms, transversal and longitudinal. Transversal waves consist of energy oscillating perpendicular to the direction of movement, while longitudinal waves is the inverse (oscillations occur in the direction of displacement). Since transversal waves can oscillate in any direction perpendicular to the phase velocity, such waves can have multiple directions of oscillation.  Consequently, there is an effect known as polarization, in which the waves have all but a select set of directions filtered out. In addition, there are two (known) types of wave in the universe, mechanical and electromagnetic. Mechanical waves consist of oscillations of material matter, so their entire  exantness is contingent upon the medium that they are suffused in. The latter phenomena is the paramount divergence between mechanical and Electromagnetic waves, as the latter can transfer energy even in complete vacuity. Consequently, since light is an electromagnetic wave, light can move through the vacuum of space unimpinged.